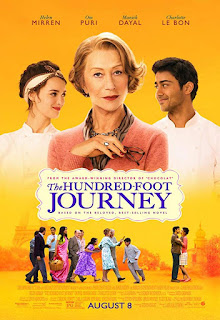 My wife and I are fans of Netflix's Chef's Table cooking series. It inspired us to watch the wonderful cooking movie Chef, starring Jon Favreau about a "taco truck" cook and his family, and now has inspired us to watch the movie The Hundred-Foot Journey, streaming now on Netflix. The movie provides a great evening's entertainment and is an inspiring and thoughtful production that includes a side order of romance.

The IMDB storyline of the movie, written by Kenneth Chisolm, follows:


The family of talented cook, Hassan Kadam, has a life filled with both culinary delights and profound loss. Drifting through Europe after fleeing political violence in India that killed the family restaurant business and their mother, the Kadams arrive in France. Once there, a chance auto accident and the kindness of a young woman, Marguerite, in the village of Saint-Antonin-Noble-Val inspires Papa Kadam to set up a Indian restaurant there. Unfortunately, this puts the Kadams in direct competition with the snobbish Madame Mallory's acclaimed haute cuisine establishment across the street where Marguerite also works as a sous-chef. The resulting rivalry eventually escalates in personal intensity until it goes too far. In response, there is a bridging of sides initiated by Hassan, Marguerite and Madame Mallory herself, both professional and personal, that encourages an understanding that will change both sides forever.

The satisfying resolutions of the conflicts of the film are founded in the consciousness of the individual characters. The bigotry and violence that occur are ultimately resolved not by social awareness or education but by the personal insights and values of the individuals involved. Love, acceptance, integrity, and compassion are the pillars of this movie, yet those values are not over-played. The movie progresses with its dramatic and comedic elements, unreeling seamlessly the choices and actions of the characters. And most of this is centered in the beautiful French countryside.

The main romantic and dramatic pairings in the movie are Helen Mirren (Madam Mallory), restaurant owner, and Om Puri (Papa Kadam), family patriarch, the autumn-romance couple; and Manish Dayal (Hassan), chef extraordinaire, and Marguerite (Charlotte Le Bon), sous chef, the younger romantic interest. However, romance is not at center stage; it is a tension and an unspoken hope throughout most of the story, secondary to the ambitions and anguishes of the characters that weave the fabric of the story. The acting in the movie was a nice touch--masters of the craft in Mirren and Puri combining both drama and comedy in a believable mix, Dayal and Le Bon providing a refreshing reminder of the winsome power of discovered love. The directing consists of subtle beats and light touches; the costumes are believable, lovely, and at times outrageous.

I just have to come out and say that the manner in which the conflicts of the story are resolved is immensely satisfying. The action reveals that it is possible to see what needs to be done and then to make the correct decision. In this movie, the main characters search for meaning and fulfillment in their lives. They wrestle with their duties, ambitions, and sorrows, and that struggle is believable. They make their way through, though, and complete the journey to become individuals of balance and integration.

Nowadays, there is so much attention placed on the crudity and roughness of the world. This movie was a refreshing reminder that we define our world and that we need not be scarred by the vicissitudes and challenges we face. We can prevail. We can find beauty and love. We can make a positive impact. This movie certainly did that for me.