The Messiah Has Come, So Whaddya Think?--A Review of the Netflix Series 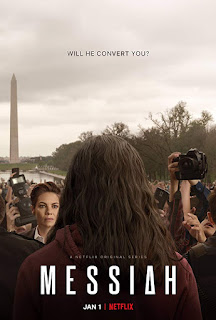 Sometimes it's not what we know that's a big deal but rather what we don't know.

In Netflix's Season 1 of Messiah, that is certainly the case. Individuals, the media, organizations, religions, and nations are gathering information and trying to figure out who the heck this guy is. Here is the IMDb's description of the streaming series.


"When a CIA officer investigates a man attracting international attention and followers through acts of public disruption, she embarks on a global, high-stakes mission to uncover whether he is a divine entity or a deceptive con artist."

The writers of the series do a good job of providing information about this mystery man, known as Al-Masih, in such an even-handed manner that just as soon as the viewer begins to arrive at a conclusion, the scales balance again. In the series, individuals and leaders of the main religions in the Middle East have opinions about this man. This review is not going to discuss the religious connotations of a second coming. Messiah is, after all, just a TV show. So how good of a show is it?

I'm going to include two references to the TV series, not really spoilers but more information to provide perspective. At one point, Al-Masih states, "I walk with all men," generalizing his spiritual path and refusing to be identified with any one religion. In a later episode, he challenges those listening to him to realize that he is not the important focal point--that each of them should be considering who they are rather than focusing on who he is.

This is really the point of interest of the series for me. The writers focus on those characters who, for various reasons and with different motivations, have been pulled into Al-Masih's orbit of influence. Al-Masih remains the constant in the series, even when we gain new information about him and his past. His behavior and message remain constant. However, the characters around him are pushed and pulled from within and without, and that creates significant tension in the story. A few come to believe; all come to question.

Those "acts of public disruption" are significant to the storyline. Social evolution implies change, and when change arrives, then the possibility of growth occurs. The powers that be and individual characters in the series (and the TV viewership) are forced to wonder if this process of introducing disruption to the social norm will produce positive or negative long-term changes. Is Al-Masih a social anarchist or a spiritual master?

Even though this TV show is not the story of Jesus, there are subtle parallels to the life of Jesus: the attraction of followers and then attention of the existing governments and religions. Crowds listening to Al-Masih's preaching . . . and the disruption his message and their need to believe cause. Is the United States the new Rome in the series? Is there a Mary Magdalene, a Judas Iscariot? How will the characters of Season 1 change in the second season?

The secret of enjoying this show, I think, has its metaphor in chemistry. Don't pay attention to the catalyst. Pay attention to the solution into which the catalyst has been introduced. As both Jesus and Al-Masih--and many other seers and prophets--have said, it's not about the messenger. It's about the people who hear the message. Netflix describes this show as a "fictional story not based on true events." Perhaps they should have used the word "factual" instead of the word "true."