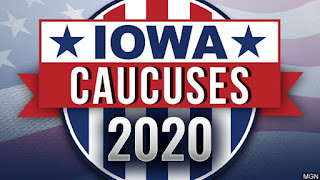 Media impressions of the 2020 Iowa Caucuses has not been positive, especially with the flawed app for reporting results. This was my first time (even at sixty-eight years of age) to an Iowa Caucus, and prior to the event I was both encouraged and cautioned regarding the process. I am reporting that my experience was positive, unifying, and--how can I phrase this?--a glance back in time.

Arriving at the caucus site at my town's local convention center in SE Iowa, 451 Democrats showed up to represent my ward. I had arrived thirty-five minutes early, had signed in to confirm that I was a registered Democrat, and then received a number that I stuck to my shirt to verify my registration. I wandered around the center "unaligned" area, chatted with a few friends, a former student, and then sat down in my group with some friends.

There were some formal organizational procedures--the temporary ward leader-designate read a statement from the state organization, explained the early organizational steps, and then we moved forward: electing a presiding officer for the caucus, a couple of other officers, and then listening again to the protocols.

Heading to the first counting of supporters for candidates during a thirty-minute time period (there were three counts), the various captains brought the totals up to the presiding officer, the mathematician counted to determine if the various groups added up to 451, and when that number was verified, we all realized only two candidates (Sanders and Warren) were "viable" in that they had received at least sixty-eight endorsements, fifteen percent of the 451 total. Supporters for those two groups filled out first-run pledge cards. Then there was a time segment allowing the other non-viable candidate groups to see if they wanted to combine. I was in a viable groups and just watched that for a while, but the process didn't seem to be going much of anywhere. I couldn't participate in the second accounting because my candidate was already viable and I couldn't switch.

I left early, not feeling ready to participate in choosing delegates for the state meeting or for hammering out our platform requests. It was my first caucus, and I thought I'd leave while I was ahead.

Listening to NPR Iowa radio on the way home, it was announced that at five A.M. the next morning, the results would be announced. I happened to wake up at five and turned on the radio, where I learned that the new app for submitting results had failed and that there was a lot of mean-mouthing by media about Iowa and the Iowa Democratic Party. I listened for a while, then shut off the radio.

Later in the day, I turned the car radio back on and heard NPR Iowa hosting a call-in segment, which included folks speaking of their positive and negative experiences on Tuesday night. There was also some analysis of why some folks think Iowa shouldn't be the first primary in the nation, chief among the ideas presented that Iowa demographics don't represent those of the nation. I get the point, but then I wonder what state will represent the entire nation--our four corners and middle, our races, ethnicities, age and gender, rural and urban, and wealth or lack of it. As an Iowan, though, I acknowledge the point and am certainly willing to listen and learn.

My experience at the caucus was good. Let me iterate the reasons.
I had voted in primaries before when living on the West Coast, but I can see how the caucus process fits with the history and geography of Iowa. Iowa has many small communities, pretty much evenly distributed across the state. Back in time, let's say a hundred years ago, one can imagine farmers coming to local caucus centers, say the local grange hall, where they would share what they had read and heard, where more knowledgeable individuals could speak about the candidates. The level of rural isolation would encourage more sharing and discussion in the community.

I arrived for the caucus with my list or candidate priorities, but my choices certainly weren't carved in stone, in part because I felt the candidates all had good strengths. Therefore, I enjoyed the early general discussion and the further in-group discussions. In many ways, the caucus process for me was both a political and social affirmation. It wasn't a perfect experience; the after-glow certainly didn't last long. Iowans humbly and responsibly have worked through the experience, even though the glitch has ticked off the media--have to meet those broadcast timelines, you know!

Once I stepped away from my technology, all that babble just went away. Iowa made its choices, worked through its glitches, and now its everybody else's turn. My attention now is turning to patiently waiting for spring, my garden, and a little silence and sunshine.