Liars Are Among Us: Be Forewarned and Forearmed 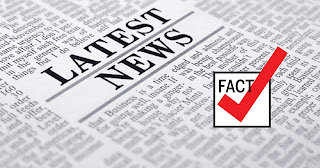 Yes, liars are among us and always have been. I'm old enough to remember that the publishing world, at least, used its editorial board to sort out the liars--not all liars, mind you. A book or magazine article by an artful liar can actually be a pleasure to read. Editors did try to sort out the sneaky liars, though, the ones who told lies in all their various forms for personal gain, at the disservice to others, the readers included. Anybody can publish on the internet, though, with no "gatekeepers" watching for lies. We need to be forewarned and forearmed.

Examples?
Bias, according to the fact-checking entities, is delivered not just be inaccuracies (or fake facts) but often by using vocabulary that has emotional or judgmental overtones. For instance, in the Vindman articles, the words "vengeance" and "appears to be" are used in the left- and right-leaning articles to describe actions and the words of the main players in the story. The center-biased story (written for NPR) reported the actions and quoted the main players, but left the interpretation up to the reader.

Yes, what we read and hear about news events often comes with an agenda. We are forewarned.

I think it ironic that our biggest danger as readers is disinformation on subjects that we agree with the bias. We may agree with the concept or sentiment, and then even though the facts are wrong, we buy in. Having "bought in" with the inaccurate article, our world view is skewed. We become "radicalized," to use a current term. In our innocence, we blindly accept that which we want to believe, even the mis-information. We feel suffocated by too much government and don't have the habit of mind of questioning and discriminating between the validity of sources, then of course the articles about how the moon walks by NASA were faked seem a plausible theory.

It's a wonderful feeling to have someone stand up and loudly proclaim the same emotion we are feeling, even if the facts are wrong and the emotions are suspect. At the very least, as readers and listeners, we should ask ourselves these questions: How reliable is this source? Is this article an opinion piece or a news story? How many "loaded words" am I hearing? And we should especially be asking ourselves whether the emotions some outside source is stirring are our best emotions or our worst. We need to be informed citizens, not unthinking shouters in a mob.

Independent thinking and questioning what we read and hear should be taught in schools. We should gain the habit of checking the source of what we read and hear. And mostly we should be careful to not believe something that we read or hear just because it happens to evoke a warm, fuzzy feeling regarding our view of the world. We need to be more discriminating in our evaluation of the information coming our way. There be liars among us.

Orson Welles' 1938 radio broadcast of War of the Worlds led to chaos because listeners believed Earth was being invaded by aliens. Much of that hysteria was the result, it is felt, of subconscious fears arising from the war in Europe, the feeling by many views that the United States was slowly being pulled into another world war. We need to be more discerning in our acceptance of what we read and hear. We need to question our own emotions and beliefs when the world stirs us up inside. Perhaps we will learn and grow. Perhaps we will not be deceived by those who seek to con us, to take advantage of our gullibility. We need to not assume that just because the tail is wagging that the dog will not bite. Cynicism? No. Healthy skepticism or balanced, independent thinking? Yes.