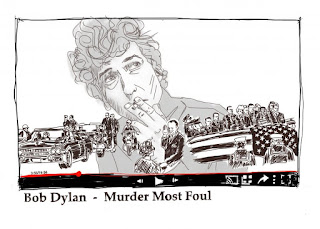 "Murder Most Foul" is Bob Dylan's longest song and, according to the headlines, also his first #1 hit. Strange for the "voice of his generation," a label Dylan has evidently never liked. Do I like the seventeen minute song? I'm not sure that I do, but does anyone really "like" a song that long? And we're not talking or including classical music here. Probably liking the song isn't the right question.

When Bob Dylan's Nobel Prize in Literature was announced in 2017, it was with the following observation: “He can be read and should be read, and is a great poet in the English tradition," by Sara Danius, Permanent Secretary of the Swedish Academy. Darius continues on to say that Dylan has been "reinventing" himself for fifty-four years. It's not controversial to say that "Murder Most Foul" unfolds another iteration of Bob Dylan the bard.

The song is more of a chant than a song in the traditional three-minute servings most folks are familiar with. The music is supportive, amplifying mood and creating a tonal milieu for the song. The lyrics are contemplative, even casual, lacking the intensity and focus of songs such as "All Along the Watchtower" and "A Hard Rain's A-Gonna Fall," for instance.

Ironically, I don't think "Murder Most Foul" would make it as a three-minute cut, and it certainly wouldn't have been a #1 hit. The song's strength won't be discovered by comparing it to other popular hits, even though the song references a great many tunes. A more compelling affirmation of the song can be made by comparing it to the work of two American poets: Walt Whitman and Allen Ginsberg and their respective poems "Song of Myself" and "Howl." The strength of these poems is the poetic technique of listing or cataloging--of heaping on image after image. This technique can also be seen in epic poems, where tribes or city-states and their heroes are listed.

The strength of cataloging is that quantity has its own quality. The rolling on of the images, the creative evocation which stimulates our sense memory has a unique power to create a powerful emotional landscape for a reader/listener's journey. The speaker in the poem reminisces about a generation's loss of innocence with the assassination of a president, the loss of an ideal vision (hardly a new observation, one reviewer notes). The reminiscing is a stream of consciousness ramble, seventeen minutes of on-and-on, and all that ultimately hold the song-poem together is the cataloging of songs and musicians, a long rambling list of associations, that ultimately creates an effect: we have lived a good life, a varied life, and a worthy life, which can be appreciated best from a cosmic perspective, in its totality. The points and pieces seem random and pointless, but all together, meaning exists.

I'm reminded of Milton's Paradise Lost and Alexander Pope's "Essay on Man," where Milton sought to justify the ways of God to man, and Pope sought to vindicate the ways of God to man. Milton wrote from a climate of belief and faith; Pope wrote from the time of the Age of Reason, where skepticism and satire were the darlings of the time. "A Hard Rain's A-Gonna Fall" justified that Flower Power spirit of protest and idealism. It resonated in a timely manner the emotions of many during Dylan's early recording years. "Murder Most Foul" vindicates that spirit of protest and idealism in the current "OK boomer" climate, a climate where younger generations are asking, even mocking or ridiculing, the accomplishments of the grey-haired Boomer generation.

It's appropriate that Dylan released the song at this time when our culture is being challenged by an impartial host, the novel coronavirus. Isn't it healthy to look back and see that the perfect idealism and hopes of youth don't need to be reassessed as failures just because time has worn and blurred the vision? Lack of perfection is not failure. I'm reminded of what William Faulkner said in his  Nobel Prize acceptance speech.


“I believe that man will not merely endure: he will prevail. He is immortal, not because he alone among creatures has an inexhaustible voice, but because he has a soul, a spirit capable of compassion and sacrifice and endurance. The poet's, the writer's, duty is to write about these things. It is his privilege to help a man endure by lifting his heart, by reminding him of the courage and honor and hope and pride and compassion and pity and sacrifice which have been the glory of his past. The poet's voice need not merely be the record of man, it can be one of the props, the pillars to help him endure and prevail.”

It's notable that in order to fully appreciate "Murder Most Foul," one has to examine the wholeness. One has to consider the poem in relation to the great works of literature. One has to pay attention. And, finally, just like many great works of literature, one interacts with "Murder Most Foul," appreciates its message, and then sets it aside. It's fulfilling interacting with the song/poem, but it's not light entertainment. I'm not going to be listening to the song while cruising down the road. Maybe "Lay Lady Lay."