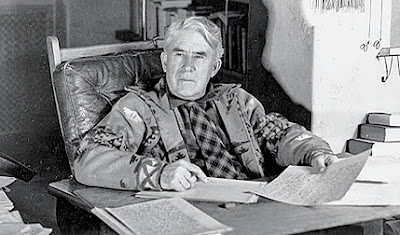 Oddly enough, "Part 1" of my love/hate relationship with Zane Grey's writing was posted on this blog twelve years ago. So in the last twelve years, have I reconciled my conflicting perspectives of Zane Grey? The short answer is no; I am still conflicted. Seeking wider perspectives, I searched for other articles about Grey's bigoted writing, the racist and sexist elements in his writing. An article posted on Literary Hub, "In Praise of Racist Books: Notes of an Immigrant Reader," drew my interest, written by Black scholar and professor Louis Clude-Sokei. (A hit on my "Part 1" Zane Grey article also was pulled up, always a hoot to find myself on the internet.)
Clude-Sukei grew up reading whatever books he could get his hands on, most of them by default White writers writing for a White audience. A first his reading simply matched his life experience--it was a bigoted, racist world he lived in, and the books he read were consistent in vision. Then Clude-Sukei grew more sophisticated and grew "to enjoy the frisson of contradiction." He writes about how "those damned racist books": "taught me that we are all shaped and rendered impure by racism, colonialism, and various forms of inequality, all the time and in all texts. Who or what we would be without those forces is unanswerable." The racism and gender rigidity in Grey's novels are historical footprints of times past (and present).
Here are a few concepts from the article that resonated with me: 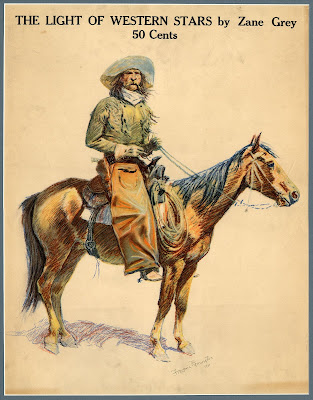 My recent foray into Zane Grey's world was his romance The Light of the Western Stars. In the novel, Madeline Hammond leaves the privileged world of the East, seeking her brother in the wilds of New Mexico, during the beginnings of the revolutionary times in Mexico in the early 1900s. She experiences the vivid roughness of the environment and the people who live there. Action includes lightning storms, fast horses, wild cowboys, gunfights, and of course love. Grey's ability to describe the Western environment is at times sublime.

Rain fell steadily. The fury of the storm, however, had passed, and the roll of thunder diminished in volume. The air had wonderfully cleared and was growing cool. Madeline began to feel uncomfortably cold and wet. Stewart was climbing faster than formerly, and she noted that Monty kept at her heels, pressing her on. Time had been lost, and the camp-site was a long way off. The stag-hounds began to lag and get footsore. The sharp rocks of the trail were cruel to their feet. Then, as Madeline began to tire, she noticed less and less around her. The ascent grew rougher and steeper—slow toil for panting horses. The thinning rain grew colder, and sometimes a stronger whip of wind lashed stingingly in Madeline's face. Her horse climbed and climbed, and brush and sharp corners of stone everlastingly pulled and tore at her wet garments. A gray gloom settled down around her. Night was approaching. Majesty heaved upward with a snort, the wet saddle creaked, and an even motion told Madeline she was on level ground. She looked up to see looming crags and spires, like huge pipe-organs, dark at the base and growing light upward. The rain had ceased, but the branches of fir-trees and juniper were water-soaked arms reaching out for her. Through an opening between crags Madeline caught a momentary glimpse of the west. Red sun-shafts shone through the murky, broken clouds. The sun had set.

I enter Grey's world as an immigrant, a time traveler. The author has his "boxes" or perspectives that inform his writing: the sensitivity and intuitions "unique" to women, a "let's bash Mexicans" box, the insipid anemia of Easterners and the childlike impulsiveness of Westerners, the regenerative qualities of nature (which at times Grey romanicizes until it becomes a cliche).
I love Grey's description of the natural world, and I love his passionate characters and storylines, even with their brittle characterizations and moral binary development. As an immigrant reader, I enter Grey's novels, recognizing that I'm entering territory that will sometimes be hostile to my world view. I enjoy the frisson of being on guard, of advancing into a perspective that I at times will vehemently disagree with. Like all travelers, I advance cautiously into the "history" of the writing, the world at times beautiful and at times ugly, a stranger in a strange land--a situation not all that different, actually, from every time I walk out my front door.
Posted by Tom Kepler at 4:23 PM