When Buying Land, Do We Own a Bit of Nature? 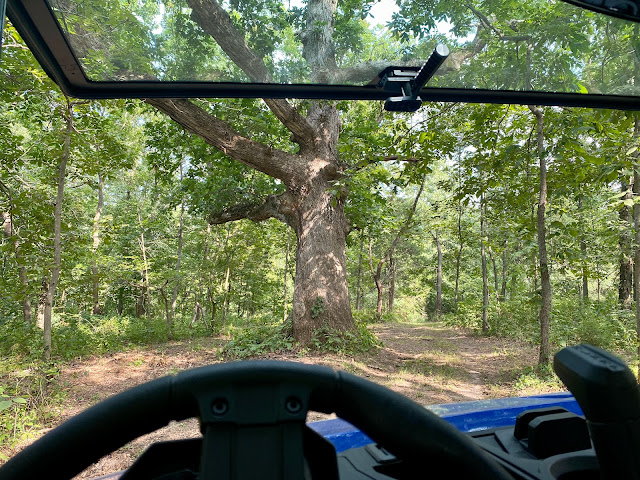 How do we own land, how do we possess it? Right now my wife and I possess legal documents that say we own thirty-five acres of farmland in southeast Iowa. The abstract for the land will be our narrative of ownership, a record of the first owners, a thread of ownership down the years. For me, I've been engaged in a process of defining my ownership of this land, and so far I've found it possible to accept the idea stewardship rather than ownership.
Our thirty-five acres are mostly defined to the north by Big Indian Creek. The defining features to the east are the county gravel road and the rural electric easement that skirts the road, a strip of land cleared of trees, threaded with power poles and lines. The land rises from that northeast corner of creek, road, and bridge uphill to the south border of our land, higher and drier ground. Most of the thirty-five acres are covered with trees, the land dropping off from the south mostly to the north and east, down to the creek. The configuration of the land on the map is roughly a rectangle, but walking the land with its several ridges and ravines still is somewhat confusing, that confusion exacerbated not only by the lay of the land but also by the thickets of multiflora rose, which inhibit straight travel. There are sections of the land we haven't seen yet because of barriers of multiflora and poison ivy. Our first impression of our stewardship of this land is that we have to begin clearing out the invasive multiflora and the noxious poison ivy. We expect this to be a never-ending battle, not one we accomplish, check off the list, and then forget about.
My first connection with the land--and I believe also my wife Sandy's--has been to the several large white oaks that extend along the east and south sides of the property--about a half dozen that are easily over a hundred years old. Two or three are truly massive, a shading, abiding, gnarled presence on the land, whose presence seems to attract (or radiate) silence and stillness. I cannot help but pause when I stand beneath either of the largest two, both on the south end of the property. I feel myself rooting to the ground, extending both into soil and into sky. Am I embracing the world, is the world embracing me? Those ancient oaks allow me, remind me, that I am more than a bundle of frenetic, scampering simian activity. I can stop, cease my busyness, and just abide--be for a time, and perhaps if I visit and share the silent existence of the oaks often enough, I can expand my sense of self and become both the tree scamperer and earth abider simultaneously.
To become one with the land is our highest sense of ownership. When ownership identifies as obligation, then our legal title to this patch of land begins to make sense to me. We humans have changed the land, shaped the face of the world. On this patch of land, I will have a chance to "unshape" the world, to rewild our bit of earth by removing that which is alien and by adding a bit of civilization by building and landscaping in a sustainable manner. I don't hike this land in the same manner as I hike in one of our state parks. Sometimes I will hike with a trekking pole, but sometimes it will be with a long-handled shovel so that I can remove multiflora root balls. Next spring I want to hike and discover blackberry patches, to mine the motherlode of morel mushrooms. I want to build a tiny eight-foot by eight-foot house that overlooks one of our small ravines, situated so that I can sit and allow the vista to take my eye to the horizon.
Camping in its purest form is the process of interacting with the land yet leaving no trace, to move across the land like a deer or a fox. The deer has its copse of trees and its form in the grasses where it sleeps and rests. The fox has its den where it waits out the storm and where it raises its kits. Sandy and I will have our little Airstream Basecamp for staying on the land, some small shelters we build to keep us dry and warm, and eventually a small home. Sometimes we'll hike with trekking poles, sometimes with shovels. I have a lot of research and learning to do. I want to learn the names of all the varieties of trees on our land. I want to learn which variety or varieties of grasses are the best seeds to spread. Most of all, though, I want to balance my civilizing and "uncivilizing" of the land with abiding on the land. I think if it as a partnership, for the more I live on the land, the land will live in me.
Posted by Tom Kepler at 6:51 AM

Email ThisBlogThis!Share to TwitterShare to FacebookShare to Pinterest
Labels: Landowner