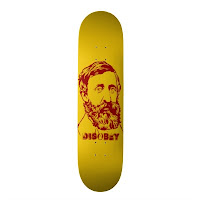 Here are some ideas the students came up with for The Life of Henry David Thoreau:


Thanks to Paul D. and Ryan S. for their work on this project. For more information on Henry David Thoreau, try The Thoreau Society or The Thoreau Institute.


Copyright 2010 by Thomas L. Kepler, all rights reserved
With appreciation to http://www.zazzle.com for the Thoreau skateboard image
Posted by Tom Kepler at 5:00 AM