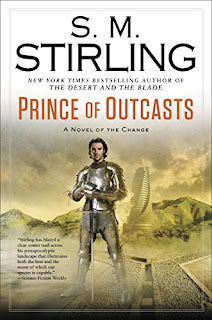 Prince of Outcasts, by S.M. Stirling, is the third book in the third cycle of his Change alter-reality, post apocalyptic fiction series. He's sixteen novels into the series now, where the laws of nature change and time/space is fractured.

Three novels--Island in the Sea of Time, Against the Tide of Years, and On the Oceans of Eternity, form a set about how Nantucket Island is sent back in time or into another time dimension. The remaining thirteen novels center on our known universe and world that has Changed, with electricity and a few other laws of nature being neutralized, and how the world fares. The first three books, beginning with Dies the Fire, follow the lives of those who live through the Change from Day 1. The next seven novels, beginning with The Sunrise Lands, chronicle the lives and events of the second generation of survivors, notably the character Rudy Mackenzie. The last three novels (and more to come, no doubt) follow the third generation.

Here are the ratings for the last three novels (linked to my reviews):
So, why three stars (a so-so rating) for Prince of Outcasts?

My evaluation of this novel is much the same as for The Golden Princess. Stirling is going to publish a Change novel once a year for a long time--so what's the rush? He is now not so much writing novels but an extended (and extensive) chronicle of an alternative reality. Sure, there's a story line, stuff happens, but there's also all that interesting anthropological detail about the development of ecosystems and cultures after the change. Let's include that, because if someone's read all the other books (including a short story anthology by various authors, The Change), then we've got 'em hooked. Right?

Prince of Outcasts, avoiding spoilers, is about Asia, post-apocalypse, and about bonny Prince John Arminger Mackenzie, who we can assume is the "outcast." There is an alternative storyline about Princess Orlaith, John's sister, and a Japanese princess/queen. And the anthropological detail is interesting, so thank you, S.M.

However, sometimes the detail is too detailed, so to speak, and the storyline drags. Six pages of description about when the two princesses hit town and what the town looks like are just too much. I could give more examples (too many more), but one gets the idea. There are places where the story's momentum bogs down.

Good and new elements have been added to the Change tome, though.

Pip, a descendant of British royalty stranded in Blackout Australia, is a scrappy and original addition to the series' characters, as is her protector/sidekick Toa, who appears to be a Maori warrior. The good ship Tarshish Queen and captain and crew provide good sailing adventure.  There are some episodes of good action and magical storm.

Personally, I found Stirling's development of the Far East setting rather bland, and his Eastern evil characters rather diffuse. And, to be honest, the protagonist, Prince John, is a bit of a bore--a young man just coming into his own time, and not quite there.

Ultimately, this novel is another transition piece, introducing new settings, new characters, and new conflicts. It is much like the introductory novel of the third cycle of the Change novels, The Golden Princess. If you've read the other novels, you'll enjoy Prince of Outcasts for some good moments interspersed with new places and people. If this were the only novel in the series you were to read, though, your reaction would be as the Beatles said in "Daytripper": you "took me half the way there now," S.M., you big teaser.

The novel even ends with a cliffhanger.

In all fairness, the second novel in this third Change cycle, The Desert and the Blade, was an excellent read that held up on its own and moved along at a reasonable clip.

OK, so I've read sixteen novels and one short story anthology about the Change (or, as they say in Oz, the Blackout). As a fan, I hope things work out for the descendants of the Change. As a writer, I hope things work out for Stirling and he cranks out another five-star novel with his next in the series. As a reader, I hope the next novel is a real page turner. This one, meh, wasn't that.
Posted by Tom Kepler at 3:54 PM