Deborah Harkness and her All Souls Trilogy (Discovery of Witches) 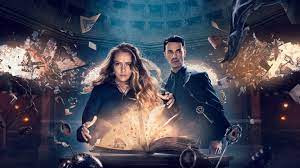 The word verisimilitude means something has the appearance of being true or real. In literature, it means the author's world-building skills are such that the reader believes the reality of the work and is not pulled out of the "reading reality" by too great a stretch of the imagination. We, as readers, willingly suspend our disbelief and enter the fiction, wide-eyed and believing. Novelist and scholar Deborah E. Harkness in her fictional All Souls Trilogy creates a believable reality with credible characters that include witches, daemons, and vampires . . . plus a few charismatic plain old humans.

As the pitch for the trilogy (and the TV series A Discovery of Witches) emphasizes, magical creatures exist among us--in plain sight. Having read the trilogy a long time ago, I decided to try the Amazon Prime free first season of the TV series, especially when I realized that actor Matthew Goode was cast as the character Matthew Clairmont. I've always appreciated Goode's work when he's popped up on the screen through the years. In many ways the TV series is just as enjoyable if not more so than the books, the drama playing out in the series without shading toward melodrama.

Finishing the first season lickety-split (it is winter outside, after all, and conducive to sitting on the sofa), my wife and I immediately bought the second season via Amazon streaming. Then when we finished and decided to buy the third season, we discovered that it was still streaming week by week. We decided we didn't want to subscribe to another streaming service (available via Amazon), so we tried out Plan B and decided to just read the third book of the trilogy. Then we decided that rather than waiting and checking the book out of our local public library, we would choose immediate wish fulfillement and bought the Kindle ebook. I'm happy to say that the move from TV series to book was seamless, with just a few minor changes noticeable.

I've ripped through the third book of the trilogy and now have the fourth book, Time's Convert, on hold at the library, which I'll check out today. The fourth book continues the saga but isn't necessary for closure, which Harkness supplies at the end of the third book of the trilogy, The Book of Life. I've enjoyed sharing this trilogy with my wife--our little book club of two. We're both happy with this series, which manages to combine magic with romance without descending into "bodice-ripping," gratuitous explication. And, of course, when the third season of the series is available as a unit, we'll enjoy that, too. In fact, we've discovered that the first two seasons of A Discovery of Witches is available at our good ol' public library, so when they acquire the third, we're good to go!
Posted by Tom Kepler at 6:37 AM