"70" Is a Compelling Number--and "Septuagenarian" Is a Mouthful 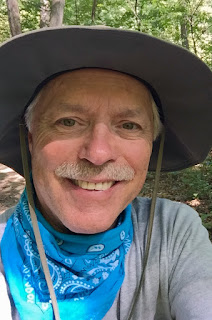 I graduated from high school in the 1970s and survived my 20s during that decade. It was a significant time, especially if we back the time up a little earlier to 1966 or 1968--political assassinations, the Vietnam War, the Civil Rights movement, the space program and a trip to the moon. Now, it's a half a century later and I'm celebrating another aspect of the 70s; I've now lived that long. February is that month where I become a septuagenarian, and just passing that mark leads me to some reflection. What I'm realizing is that many of my core beliefs have remained with me all my life and that now in my retirement I find them no less powerful and no less compelling. There is a certain timelessness in that--that what we are is not lessened by time. The times we may find distracting, but inside us there is a timelessness that remains.

I find myself increasingly compelled to listen. Yes, I still have things I want to say, ideas I want to share, but the necessity and need to listen has grown in my life. It was always there. I remember when I was eighteen years old on my high school's "senior skip day," a bunch of us guys got in our friend's old Packard and drove to Sacramento, California, (about an hour and a half drive) to visit one guy's parents and to watch the movie Woodstock. My friend was living with another friend's parents so that he could graduate his senior year with all of us. His parents had moved because of a job transfer that could not be postponed. Part of our excursion to Sacramento was a trip to a local park, which happened to be a gathering place for the homeless, many of them alcoholics. One Black man who called himself "Johnny Walker the shit talker" regaled us with stories, wowing our naive young selves with entertaining stories . . . and then he hit us up for our spare change, which we happily gave him. He asked for us to give, to us as a group and then individually without being pushy. When "Johnny" got to me, he said, "And how about you--you with the wise eyes?" Of course I contributed, but even then at eighteen years old, I realized what the man was saying. We had made eye contact several times during Johnny's story-telling, at a deeper level than that of audience and raconteur. There was the jive, and then there was the humanity. What I was doing was listening, with both my mind and my heart. I was including the old alcoholic in my world, considering him and the moment significant. We need to listen to one another, to include and absorb the perspectives of others into ours. I intuitively knew that when I was young and appreciate the importance of listening and inclusion more consciously now that I am older and have the benefit of my years of experiencing listening . . . and not listening . . . and the ramifications of each.

Researching a situation prior to engaging is increasingly important for me. Listening, of course, is an important aspect of research; in fact, it's primary research. In a world increasingly polarized, I want to bring balance to my decisions and actions. Research is an important way I learn, too. Therefore, by considering all sides of an issue, I can bring a more balanced approach to moving forward in my life, one that involves both intellect and emotions. Even after research and consideration if I find that my perspective hasn't changed, I might find a more positive and integrative way to act or speak. I'm thinking that this approach might seem "old person conservative," but to me it doesn't feel that way. There's a lot of creativity and discovery in considering many possibilities--and then there's the advantage of spending time in that field of all possibilities. Coming to a decision actually erects barriers and boundaries. Why rush to do that?

My family is a powerful defense against alienation and isolation. I am fortunate to be surrounded by my family--my wife, our blended family of three children (in their 30s), and our five grandchildren. I remember in my first years of public school teaching in the early 1980s that statistics determined that single parents or blended families had finally exceeded the number of nuclear families (mother, father, and genetic offspring). My mother was adopted, my son was adopted, and my entire life I've been taught and lived the truth that families are formed in many ways. "Family" is not a matter of blood but of spirit. My wife and I are fortunate to have our children and grandchildren living in the same town as us. However, I also realize that if this were not the case, we would create a family of friends and activities to keep us involved with people and engaged in vital activities. As Bob Dylan sang, "Those not busy being born are busy dying." My family provides me with an easy means of engagement with life--sometimes a bit too much, in fact! Then I pack up and go camping for a while. It's important, though, to live in the present and to not feel that our best years have already passed. I'm excited about my daily activities and my future hopes and plans. Having my family around provides many opportunities for participation in life. Extending family to its greatest scope, when "the world is my family," then how can there be alienation and isolation?

Freedom, variety, and creativity have increased in my life. Retirement has provided more time for me to choose my daily routine, to structure my time more around fulfillment rather than survival. I don't have a lot of needs. There isn't an outstanding list of things for me to buy and do--snowmobiles and trips to the geographic wonders of the world. It's not that I'm against owning a snowmobile or a new Ford F-150, or that I'm against visiting the Grand Canyon or Mayan ruins. The need isn't that great, though. I don't have a Santa's list of things I want or a bucket list of things I have to do before that bucket gets kicked. Possessions or accomplishments are not the ultimate summit of achievement. Fulfillment for me is an inner state, a state of being which cannot be located by gps or deed. Ralph Waldo Emerson observed that we cannot find a better world by traveling because we take our old perspectives along with us when we take off. I'm so grateful and fortunate to be practicing the Transcendental Meditation technique twice a day--and to have been doing so for forty-nine years. Being healthy and dynamic is a gift, but it is in many ways a gift that I have given myself by lowering my stress and developing my inner potential by practicing TM. I look forward to meeting the joys and challenges of each day, just as those in business enjoy the market, having first stopped by the bank.

We must be kind--both to ourselves and to others. When I was a full-time public school teacher, I once had a colleague tell me, "I was talking to a student the other day and the student mentioned you and the kind of teacher you are. He said, 'Mr. Kepler is a kind man.'" My response to my teacher-friend was, "What better legacy than that?" I once had a student--a 7th-grader--ask me about gay rights, whether being gay was right or wrong. I told her that many people had debated this question, and after listening to all the arguments for each side, I had finally realized that for me the "right/wrong" debate about others wasn't the most important point for me. What I realized was important for me was the following question: "Do I want to be the kind of person that makes other people suffer, that hurts the lives of others?" I told that young student that I chose not to make others suffer because of my beliefs, whatever they were. I felt this was a good answer for a public school teacher, where children come to school from families with many different perspectives and beliefs. Any parent with any belief would have a hard time condemning me for telling their children to be kind. It was also an American answer, too, because I was telling the student that we have a right to live our lives according to our principles, but others with different principles also have that right in the USA. Nurturing ourselves and others is not just a good idea, I think. It's an essential idea, a survival trait for our species. We are such an intelligent species, human beings, yet we have to temper our cleverness with wisdom. We have to look beyond our immediate desires and fit ourselves and our dreams and actions into the greater wisdom of the world.

What quality of life am I living? A current buzzword is "intentional" living, and although I'm not entirely comfortable with that word, since it seems to somehow and to somewhat disparage spontaneity, I do understand the basic idea that we should think about what we want and what's important to us in order to make choices that will be more fulfilling. Even Joseph Campbell's "follow your bliss" is in many ways advocating an intentional life--if I actually understand what people who are living intentional lives intend the word to signify. Some choices are not easy, perhaps because their impact on others creates complications, or perhaps because some choices require a level of self-scrutiny and honesty that cuts close to the bone--a kind of intentionality noir, as it were. I wonder, though, if the intentional life becomes easier in some ways as one grows older. Energy and activity slow a bit; lifestyle choices and routine expand a bit in retirement; and if one has any level of self-awareness, then experience will impact one's choice and priorities. Since wisdom is knowledge tempered by experience, perhaps an intentional life in one's elder years is simply learning to pause and wait for wisdom.

I think all the above are part and parcel of a meaningful life--being a part of our natural and social world, being true to ourselves yet still honoring and cherishing the differences in others, speaking out for what is true and right yet still allowing for differences in others. Integration of life, integration of opposites, holding the entire world within ourselves and not just one tiny part: this has been my lifetime goal, to live an integrated, balanced life of fulfillment. I feel I'm getting better at this as I go along, and I'm thinking that living the decade of my 70s will be just as exciting as when I lived my 20s. What about the fifty years in between those two decades? Fifty years is half a century, and yet somehow it feels like it's been no time at all. Let me reflect on that a bit--perhaps consciousness exists in time but is not of it? In the end, though, I tend to enjoy and pursue more simple, productive and nurturing activities. It's like Voltaire said at the end of his play Candide. As one translation put it regarding the frenzy of life--"That is very well and good, but let us tend our gardens."